Warning: strtr() expects parameter 1 to be string, array given in /home/h/heavyworld/public_html/wp-content/themes/events/shortcodes.php on line 106

Despite the difficult situation the annual HEAVY RUSSIA conference dedicated to oversized and heavy cargoes logistics in Russia and CIS countries took place on 16-17th of November.

It has already become a tradition to open the forum with the discussion of the impact on economic situation in Russia on project logistics market. Marat Yarullin, FESCO company project logistics director noted in his report that in 2020 the global economy is heading for a decline at a rate of 4-4.5%. Some exceptions are made by the PRC but only a few since domestic reserves even those of the PRC will not be able to provide long-term growth. In 2021 Bloomberg represented expert community predicts recovery and even growth in comparison with the pre-crisis period. In 2020 prices for precious metals and food products (wheat, rice, soy, sugar) rose against the background of falling commodity prices. Expert community expects a significant price adjustment during 2021.

As for investments in Russia the economic crisis, epidemic and anti-epidemic measures caused a significant adjustment of investments volumes in fixed asset from the expected +6.1% during 2020-24 to -8.7% in 2020 relative to 2019, +4.7% in 2021 relative to 2020 and +4.1% in 2022 relative to 2021. Marat described this situation as negative growth and that should be treated as a kind of stabilization. He added that maybe in 2015-2020 we grew at a faster pace somewhere, doing things that we do not need. Projects were made by inertia were calculated by the preparation of previous projects without a normal investment analysis. And these projects were the first to go under the knife of the new reality. And it just goes in a slump. But modernization is underway, new technologies are emerging, automation is taking place, and this shows that there will be growth, and it will rebound. 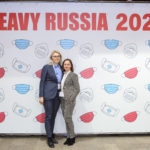 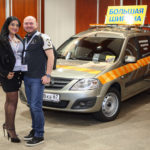 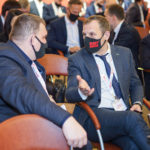 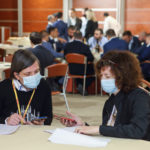 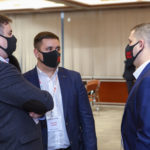 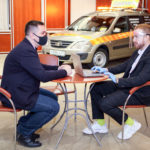 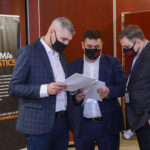 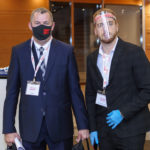 Among the main risks of 2021-2022 Marat named sanctions, military conflicts, COVID-20, protectionism trend, geopolitics, food shortages. The latter circumstance is gaining more and more weight in the light of the upcoming global humanitarian catastrophe. Marat also outlined opportunities both related to risks and the current agenda such as those that opened quite a long time ago: green energy, global warming, and recently: the rise of domestic tourism, transport automation, LNG and gas chemistry boom, export projects of Russian EPC.

Projects for the modernization of oil refining capacities in the Far East, Nizhny Novgorod, Volgograd, Ust-luga, etc., as well as projects for the construction of urea, ammonia, and methanol production facilities: Shchekinoazot, KuibyshevAzot, Togliattiazot, Metafrax, Acron Engineering Research and Design Center are not left without work.

Projects in the near abroad continue – construction of a refinery in the Mangistau region, a mini-refinery in the Turkestan region and a complex of petrochemical plants at the Atyrau site in Kazakhstan, modernization of the Ferghana and Bukhara refineries in Uzbekistan. it should be noted that there has been no news about projects in Turkmenistan for a long time. it is better not to mention Azerbaijan, as this topic is now so uncertain. It can be summarized that Central Asia and Transcaucasia are gradually moving into the area of high risks associated with military conflicts and color revolutions. How to work in such conditions will be discussed below.

We are moving smoothly to energy. In the heat and hydro power sector 45 objects with a total installed capacity of 10.4 GW are projects for the modernization of thermal power plants and GRES in regional and large district centers. In the nuclear energy sector, a unit was successfully launched at the Belarusian NPP and 2nd unit is planned, projects are also being developed in Egypt, Hungary, Finland and perhaps a positive decision will be made by the IAEA on the Uzbek NPP. As for wind power, this direction is developing – wind power plants are being built, especially in the south. We are waiting for full-scale work to begin in the north – more than 30 wind turbines on one wind field.

The mining industry has reached the next evolutionary stage of its development, when it is forced to develop hard-to-reach fields, build mining facilities and infrastructure there, including the Novaya Zemlya archipelago. Fields in Transbaikalia, Yakutia and the Magadan region no longer seem so remote and heavy.

In general, the situation in project logistics is as follows: all started projects will be completed with or without delay, but new projects in 2020 and probably 2021 are postponed or completely canceled, which in the future may affect the oversized and heavy cargo transportation industry. Therefore, Marat Yarullin already offers to undertake diversify activities, renew the park, and invade other niches, offer yourself to EPC as a replacement for outgoing Western partners.

Participants were particularly interested in the story about one of the recent projects of FESCO company. In the epidemic midst, which was overlaid by the military conflict, a project was carried out to deliver cargo for the Yerevan thermal power plant from the port of Poti. Svetlana Almazova, FESCO company project manager said that the list of heavy oversized equipment included a gas turbine on a transport frame with a total weight of 205 tons, a transformer weighing 182 tons, a gas turbine generator weighing 169.4 tons, a steam turbine generator weighing 139 tons and a condenser weighing 85 tons. In addition, in the port of Poti, we received six ship consignments of various sizes with a total weight of more than 14,500 freight tons. It was assumed that three oversized units – a transformer, a turbine and a gas turbine generator-would be sent on a 16-axle railway conveyor, which was mobilized from Zaporozhye (Ukraine).

It was also assumed that loading on the conveyor in the port of Poti and unloading from the conveyor in Yerevan will be carried out using a single LiftSystem 44a portal system. The first cargo, including three oversized heavy trucks, arrived in Poti in early May 2020. By this time, all the borders were already locked, and we had to improvise and make changes to the project in a hurry. 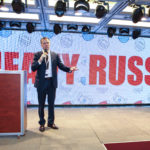 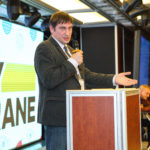 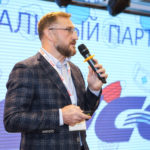 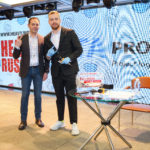 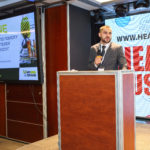 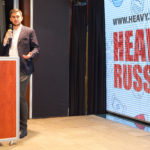 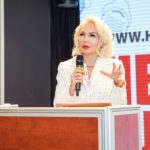 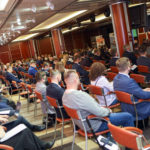 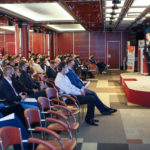 Transshipment in Yerevan was decided to be carried out with the help of a portal system, where it was possible to mobilize it together with the staff. For this purpose, we have done a lot of work with the Ministry of Foreign Affairs of Armenia, the Armenian Embassy in Russia, and our customers Fagioli S.p.A and Renco, who have helped us a lot in obtaining entry permits to Armenia for FESCO employees. The project implementation time has shifted, but the customers understood our difficulties and provided all possible assistance and support.

Transshipment in the port of Poti was carried out using two LiebherrLHM550 cranes with a capacity of 100 tons each. To handle our heavy loads, together with Liebherr, a solution was developed to remove the restriction on the lifting capacity of cranes.

When transporting long metal structures with a length of 30 m, it was not possible to conduct route analysis and engineering work, and therefore it was decided to deliver them not by road, as previously planned, but by rail.

In the process of implementing the project, company also faced military actions. On September 27, 2020, martial law was imposed in Armenia. In order not to stop the delivery of goods, as far as possible, company changed routes to safer ones, coordinating them with customers and insurance companies. As a result, due to anti-epidemic measures and military actions, there was a delay in the implementation of the project for 1 -1.5 months, but the project was implemented.

Valery Smolyaninov, Barrus Projects company head of the project implementation department, talked about the specifics of an autoclave weighing 1,100 tons from Europe to Amursk delivery project. He said that the company faced with the task of delivering an autoclave with a length of about 50 m, a diameter of 6.5 m and a height of 7.5 m from Belgium to the installation site on the territory of the Amur Hydrometallurgical Plant in Amursk. The autoclave is unique for the Russian Federation, for the gold mining industry. It contains unique technologies that will allow the processing of twice-resistant gold-bearing ores. Now this concentrate is taken out for export.

The autoclave itself was manufactured for three years by order of the Polymetal mining company. Even before the start of its production, we began to analyze and prepare the route. The transportation itself took two months.

In Belgium, the autoclave was transported by water through the channels to the port of Antwerp, loaded on the ocean vessel, which through the Suez Canal to deliver the cargo to the port of De-Kastri, where the company made road handling on largebalcony train, which is to say anymore because without the barges we would not be able to carry out the unloading of the autoclave at a marina near the city of Amursk.

The barge was chartered by the marine rescue service. This is a large-capacity barge with its own ballast system, which allows you to automatically adjust the roll during cargo operations. There are only two of them in Russia. significant dimensions make it stable and safe. At the preparation stage, all worn-out ship equipment was replaced, new mooring ends were purchased, and the Russian Maritime Register of Shipping inspected.

The cornerstone of the entire project is unloading in Amursk. To solve the main problem – the colossal water level changes in the Amur River – a mooring structure was developed, only the project of which took more than a year. it was necessary to guarantee the unloading of the autoclave this year, considering water drops of up to 5 m. We could work with the water level by the pier itself and the barge.

Two sets of ramps were prepared for the mooring structure: the first 12-meter set was laid from the foundations on the shore on a transition (support) table, which stood on 12 m stilts from the water’s edge. Transition panels were installed on the table, and a second set of ramps was laid from the support table from the middle of the axis to the barge. In total, we got 24 m of ramps and could adjust the height of the support table due to the P-shaped metal structures.

The barge saved the situation. He said when they came to the pier in Amursk, they faced a huge problem: the water level was above the historical maximum. we came to the option of ballasting, which would allow unloading with a large trim, filled all the ballast tanks, except for one, that is, we put the barge exceptionally low and carefully rolled out the road train for about 12 hours in increments of 75-100 cm.

In Amursk, the autoclave was driven on public roads. The customer insisted on upgrading the infrastructure because next year there will still be deliveries. They carried out reconstruction of power lines, 11 km road patching, reconstructed two heating mains. At the installation site, the autoclave was installed at a mark of +4 m on anchors with tolerances of 2 mm.

For more information about the conference you can contact Conference Organizing Committee – info@heavy.world 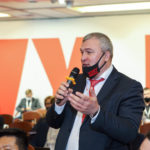 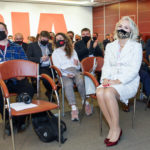 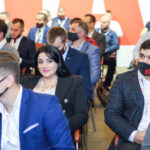 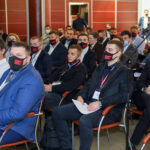 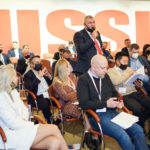 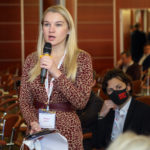 Russian project logistics market in the context of a pandemic, economic and geopolitical challenges. Trends and prospects

Main directions and trends of logistics development in the field of oversized and heavy cargo. Business in digital economy conditions

1100 tons Autoclave delivery and installation from Europe to Amursk project

Challenges and opportunities of 2020 on the example of one company

The future of the lifting services market already today

Wind generator logistics features and risks during deliveries to Russia

Prospects for navigation on Russian rivers

Development of linear service for project cargo on NSR. Prospects and opportunities

Oversized cargo transportation in the Arctic in conditions of the pandemic

Special Offer – in case of participation of two and more delegates, discounts are available.

We recommend you hotels in the closest vicinity to the venue.